The Pros and Cons of Polylactic Acid (PLA) Bioplastic, the “Corn Plastics”

The Pros and Cons of Polylactic Acid (PLA) Bioplastic, the “Corn Plastics” 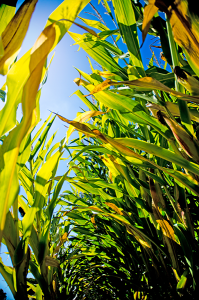 Here at Biomass, we understand the many problems associated with petroleum-based plastics. We believe that Compostable Bioplastics, typically made from plant matter like vegetable starch, cane sugar, cellulose (wood fibers) and lactic acid, are the solution to many of these problems. Polylactic Acid (PLA) is a bioplastic generally derived from animal-feed corn that can be used for a myriad of different purposes including cold drink cups, deli and takeout containers, and fresh produce packaging. Sounds great, right? It is, at least in theory. In practice, however, things are a little more complicated. Today we’ll be looking at a few of the pros and cons of these “corn plastics.”

PLA is derived from a renewable resource

One of the major problems with petroleum-based plastics is that they are derived from oil or natural gas which are only available in finite amounts throughout the world. Eventually, these fossil resources will run out. PLA, is derived from corn, a resource that can be renewed annually.

PLA plastics are compostable where commercial compost facilities are available

PLA does not produce toxic fumes if incinerated

For decades, we’ve been warned of the dangerous chemicals that can be released when traditional plastics are incinerated. Being biologically based, PLA plastics do not produce these toxic fumes if they end up being incinerated instead of finding their way to a commercial composting facility.

While the corn used to create PLA is a renewable resource, many people point out that the fields use to grow these crops could be used to create foodstuffs for the world’s growing population. They do have a point, but it is important to remember that the bioplastics industry is still young. Long term plans in the industry include determining effective ways to create PLA plastics from agricultural waste like stalks and stems which could result in bioplastics made from products that are not fit for consumption.

PLA plastics are only compostable in a commercial composting facility

Unfortunately, most PLA plastic will not break down into natural elements in your backyard composting pile. Instead, these products need to be sent to a commercial composting facility for processing. At this time, there are a limited number of such facilities in the United States. However, as the industry grows, we believe that the infrastructure for commercial composting will follow. Disposing of PLA plastic products in a landfill is an acceptable end of life option.

Whether or not commercial composting facilities are locally available, many PLA products end up getting mixed in with traditionally recyclable plastics. Because they are chemically different from traditional plastics that are labeled #1 to #6, this can cause problems in the recycling process if the products are not properly sorted before recycling begins. PLA products are identified as #7 (Other Plastics) plastic for recycling purposes.

It’s not surprising that these pros and cons prove that PLA plastics are not a perfect solution. But as long as we live in a society that embraces disposable plastic containers, we need to be working toward finding solutions that are less harmful to the environment than traditional plastics. To that end, we think that products made from PLA are a positive step toward a world less dependent on oil and more focused on renewable solutions.