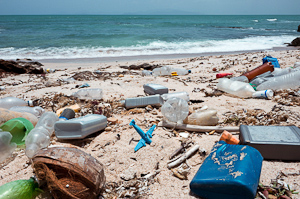 Too much of a good thing
Plastic is very durable and versatile. It can be molded into many useful shapes and sizes and it can be adapted for hot and cold applications. But the advantages pretty much stop there.

We are all aware that plastic is a petroleum-based product made from oil and natural gas, which contributes to our dependence on oil and releases hydrocarbons into the atmosphere.

And despite a “use and toss” reputation, plastic is the gift that just keeps on giving. Ironically, this material designed to last forever is used for products that we throw away. It does not breakdown naturally. It places a heavy burden on landfills and oceans. And when it does breakdown, the result is the release of harmful chemicals into our environment.

Very little plastic is actually ever recycled – according to EPA estimates in 2009, only 31% of discarded water bottles. And the energy required to recycle all that plastic makes its viability debatable.

If you’ve ever walked a beach or participated in a beach clean up campaign, you know how much plastic debris comes in on the tides – pieces of Styrofoam, bottle caps, plastic bottles, cutlery, clamshells, rope, cups, etc.

Eventually this plastic garbage finds its way to into the oceans. 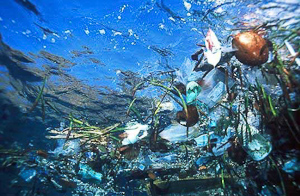 Earth’s oceans are consisit of complex networks of currents that circulate water around the world. Large systems of these currents, coupled with wind and the earth’s rotation, create “gyres” — massive, slow rotating whirlpools in which plastic trash can accumulate.

The North Pacific Subtropical Gyre is a slow moving, clock-wise spiral of currents created by a high-pressure system of air currents. It is an area that traditionally supported plankton and small sea life, but now the plastic in some parts of this Gyre outweighs the plankton by a ratio of six to one.

Known collectively as the Great Pacific Garbage Patch, it was discovered in 1997 by Captain Charles Moore, who founded the nonprofit Algalita Marine Research Foundation in Long Beach, CA.

Other major gyres exist in the South Pacific, North and South Atlantic, and Indian Oceans. Smaller gyres have been discovered near Alaska and Antarctica. Moore estimates that bits of plastic now outnumber plankton in many parts of world’s seas. 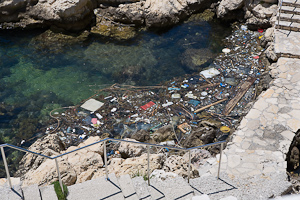 According to the National Geographic website, a team of Japanese scientists found that plastic breaks down at cooler temperatures than expected within a year of the trash hitting the water.

The team collected samples in waters from around the world according to lead researcher Katsuhiko Saido, a chemist with the College of Pharmacy at Nihon University in Japan.

“All the water samples were found to contain derivatives of polystyrene, a common plastic used in disposable cutlery, Styrofoam, and DVD cases, among other things,” said Saido, who presented the findings at a meeting of the American Chemical Society in Washington, D.C in August 2009.

For the complete article see: Plastic Breaks Down in Ocean, After All — And Fast

Ocean plastic debris harms wildlife and threatens the world’s food supply
Even though it’s out of sight, plastic debris in the ocean should not be out of mind.

Roughly 44% of all seabird species, 22% of cetaceans, all species of sea turtles and many species of fish have been documented with plastic in or wrapped around their bodies.

Sealife cannot distinguish plastic from food – and ingesting debris that blocks the digestive tract can harm the smallest to the largest creatures. This non-nutritive bulk eventually starves birds, mammals, and fish.

Genetic altering chemicals have been shown to impede the ability of fish to reproduce and as debris absorbs heat from the sun, it warms sea water making it unsuitable for sea life. Many fisheries and ultimately the world’s food supply is threatened by ocean plastic pollution.

There are other deeply concerning, potential human health impacts from these toxic chemicals that enter the marine food chain through plastic ingestion. Ongoing research explores whether they work their way up the food chain to become increasingly concentrated and enter our bodies through the seafood we consume.

Cleaning up existing ocean plastic pollution is not practical. But preventing and controlling the amount of plastic waste that ends up in our oceans is possible if we work together to:

For information about our oceans, plastic pollution, and how you can help, see the following websites: