Pollution of the air, soil and water is a huge contributing factor in millions of deaths all around the world each and every year. From asthma and dysentery to malaria and even Lyme disease, people from countries spanning the globe are suffering from diseases brought on by the effects of pollution. 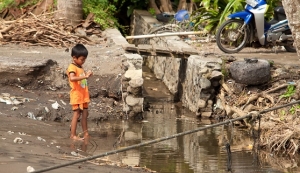 According to a study done by David Pimentel of Cornell University in 2007, over 80% of all infectious diseases can be attributed to a lack of clean water. As of the time of this study, about 1.2 billion people worldwide did not have access to clean drinking water. But it’s not only the drinkability of the water that we should be concerned with; clean water needs to be used for cooking, sanitation and various other daily tasks that help a person remain healthy. And when clean water isn’t available, waterborne infections begin to abound.

Disease brought about by unclean water can be very painful, and many of these diseases either result in a horrible quality of life or imminent death. The following are five of the most common and troublesome diseases caused by polluted water.

Someone can contract typhoid by consuming water or food that has been contaminated with feces from a person who already has typhoid. This disease used to be a lot more common before modern advances in sanitation and hygiene. However, there are still many countries and areas of the world that do not have adequate water supplies and still get typhoid.

Diarrhea is the most common facet associated with drinking unclean water. When someone has diarrhea, they not only experience watery bowel movements, but they also can become subject to extreme stomach cramps. When a person suffers from prolonged diarrhea, he or she can quickly become dehydrated and deplete their body’s salt and mineral reserves.

This disease is caused by parasitic worms. The parasites live in snails that contaminate their water source when they come out of their shell. If your skin contacts the infected water, you can become infected with schistosomiasis. Water can also become contaminated with this disease when someone with this diseases relieves themselves in freshwater. Within a few days of contact to the infected water source, a person will develop an itchy rash on the skin. If left untreated, a person with schistosomiasis can experience stomach pain, blood in stool and urine, cough, muscle aches, seizures or even paralysis.

While many people in developed countries have been given a polio vaccine at a young age, this disease is still alive and well in various parts of the world. A person can contract polio by drinking unclean water that has been defecated in. While most people who become infected with polio will not experience any symptoms at all, a small number of those infected can become plagued with paresthesia, meningitis or even paralysis. Polio can lead to permanent physical and mental disabilities and is famously known for affecting the legs of carriers.

If a person drinks arsenic-rich water over a long period of time, they can develop arsenicosis. In essence, someone who has arsenicosis is suffering from arsenic poisoning. This changes the color of the skin, can heighten the chances of various cancers, causes diseases of blood vessels in the extremities, and more.

As you can see, there are many health problems that we could improve or totally eliminate if everyone had access to clean, pure, healthy drinking water. The next time you take a sip of some refreshing water, think of how fortunate you are to have that amazing luxury.