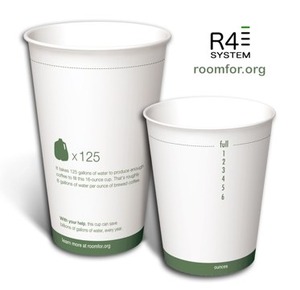 We recently announced the role Excellent Packaging is taking in the commercialization of a new type of coffee-cup: the R4 System® hot cup. In this interview, Allen King of Excellent Packaging talks about the project and the opportunities he sees for this unique product.

Allen, what piqued your interest in the R4 cups?

What got our attention is that the rommfor.org project has a different take on sustainable. Until now, the industry has focused on the materials used to make disposable foodservice packaging. The R4 concept takes the concept of sustainable packaging in a different direction. Here is a concept that is simple for us to engineer and not a burden to implement at the coffee shop — and one that could save potable water, a very precious resource that is being privatized in many third-world countries where coffee is grown. We also liked the fact that the use of the R4 System® hot cups could save the coffee operator money while simultaneously educating the consumer about the issue of water resources in the world. So, we see this as a win-win for all involved.

What makes these new cups so special?

The R4 System is simple and clever. Level markers printed on the cup clearly indicate to the barista how much coffee to put into the cups. In four words, the consumer can tell the barista to “Leave room for 2” and the cup will be filled to the second line from the top of the cup, leaving exactly that much room for cream.

What sorts of establishments do you have mind for the R4 cups?

We see great opportunities for any take-out coffee purveyors who pour coffee for their customers. These can be coffee shops, cafÃ©s or corporate cafeteria operations.

What role has Excellent Packaging played in the development of these cups?

We had many discussions with the inventor, Daniel Kokin, about the design of the cup. We evaluated the best way for the cup to convey the message of saving water and coffee while maintaining a balance between the indicator lines and the branding messages.

Were there any particular challenges that had to be overcome?

Originally, the inventor wanted the fill indicators to be printed on the inside. This has not been done before and could not easily be implemented in the beta-test phase, which is now in process. Future generations of the R4 cups will have the indicators printed on the inside of the cup. We also had to determine the beta-test format and who would be responsible for different aspects of the test and of marketing the cups. The initial target market was the cup manufacturing industry. We wanted cup producers to add this new cup to their current lines of hot cups, but we were rebuffed in this effort. The beta test is expected to generate data to support the hypothesis that the R4 concept can be easily implemented with quick acceptance by both coffee purveyors and consumers. Once we have proven the concept, we will re-approach manufacturers with, we hope, a better chance that they will want to adopt the R4 System.

What’s been the response from the test sites with whom you’re working?

The response had been beyond our expectations. The baristas and coffee servers quickly learned how to educate their customers about the R4 System, and the vast majority of customers are overwhelmingly supportive of it. All of the informational brochures we offered were quickly snapped up and read by customers in the coffee shop, so word is getting around.